They say you can never really grow as a person or learn anything new until you experience something that so profoundly changes the way you view the world that it forces you to start asking questions about your life. The search for those answers takes you on a journey that you would never previously have thought possible.

I was 19 the day I found myself on a rickety, dirty, white bus being driven 550km from Windhoek to Oshakati across the sandy, barren desert landscape of Namibia.

I watched the passing landscape with a mixture of excitement and exhileration. I had never seen such long, straight, empty roads and the mirage created by the blazing sun was something magical to behold. As we drove further north, we passed typical African villages. Small groups of wooden huts set in circles, surrounded by the local tribesman and goats that seemed to survive off eating cardboard boxes. I was in heaven.

Deep down I was yearning for something different. I desperately wanted to discover something that would make life meaningful. I didn’t know what I was looking for but in my naïve mind I felt that as long as I was somewhere different, somewhere far away from where I’d been, I would be closer to it.

And so, I had signed up with 12 others to be a volunteer teacher in Owamboland, the northern most region of Namibia that boarders Angola.

On our arrival at the teacher training centre in Oshakati we were shown to our sleeping quarters, a line of bunk beds in an old make shift gymnasium, and then taken for dinner. We entered a huge room full of teachers from all over the region and sat down at our table – the only group of white faces in the room.

It was my first real experience of Owamboland and our first introduction to what life is like without the privileges of the West. Here we were served our first meal of Oshifima and dry ox meat, staple food for the region. Oshifima is an unpleasant tasting (to me) maize meal that resembles something between mashed potato and semolina, but has a surface texture of something like congealed, cold custard, and the dry Ox meat smelt rank.

I’d always been led to believe that if you were really hungry you would eat anything. Now, I wish that was true. I discovered that there is something worse than being hungry. It is being hungry and being offerred something so unpleasant that you can’t actually stomach it. By the third day I sat at a table in front of a plate of food, and I passed out. 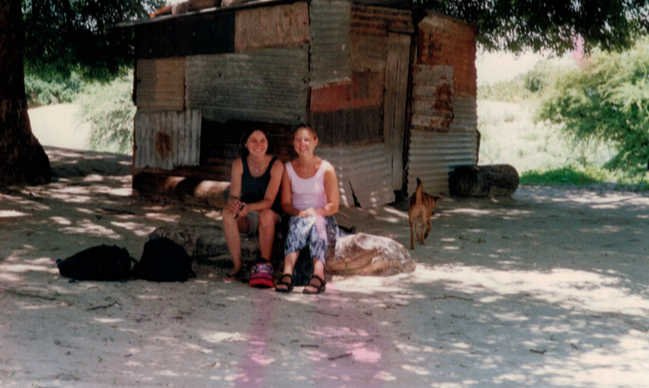 The locals seemed thourougly entertained that we would choose to starve rather than eat and so, they very kindly invited us to a braai (BBQ). The fire was burning, the stars were out and the night was filled with anticpation as we sat down to dinner. A plate of food was served and we went to dig in but stopped almost as abruptly. Picking up a curly piece of meat under the light of the stars and a few candles, we cautiously examined what we were about to put in our mouths. From where I’d come from meat did not normally look like curly, rubbery fries and we were confused by what we were being served.

On further inspection it became clear that what we were about to eat was BBQ grilled intestines, accompanied by bowls of Mopane worms. The intenstines you can imagine. Mopane worms, on the other hand, are highly nutritious and the locals fry them up as a delicacy and serve them up at every pub, rather like peanuts.

A mixture of hysteria and exctiement, turned to giggles as we dared each other to eat them. Well, it was starve or eat something. Almost immediately on biting into the Mopane worm it turned to a horrid tasting dust that stuck to our mouths. Somehow after frying them they dry out and become powdery. It’s not something I will easily forget and I have never been more pleased for the beer at the table. It was the only way to get rid of the taste. In fact it was the first thing with any caolries I’d put into my body in days and so I was seriously hoping I could live off it.

This is when our supervisor laughed and announced that there was a KFC down the road and asked us if we would like to go there for some food! I’ve never liked KFC, but that night it was the best food I have ever eaten – despite the fact that the restaurant was covered in flying bugs the size of a fist.

Fully acquainted with local teaching practices, and where to find junk food and beer, we were ready to be despatched to the schools. The principal of a local school, Andima, came to collect myself and another volunteer, Lynn. We drove 80km north on the one tarmac road until we got to Ohangwena. Ohangwena was a little bigger than the villages we’d passed on our trip north, but it was still a baren landscape of sand, palm trees and the odd dried shrub.

The town had a few houses and a few stores, including a post office and the school, but essentially these were makeshift shacks. The main centre of the town was an open area where meat, covered in flies, was hung up in the blazing sun. Second hand clothing, that looked like rejects from an oxfam store, were sold at tables. Kids ran around playing and babies were strapped to their mothers, or sister’s backs. This was to be my new home, and I was excited.

At the school I was introduced to the teachers in the staff room and informed that they still hadn’t found an Agriculture teacher for the year and would I be OK teaching Agriculture. I’d had no farming experience. I’d never studied the subject but an Australian volunteer, Liam laughed and threw me a book saying, “don’t worry, here’s the text book”.

For the next 9 months, I taught Biology and Agriculture to a group of students aged between 18 and 25. My classes were very enthusiastic and patient with my teaching and together we made our way through contour ploughing even though none of my students had ever seen a hill (we actually had to spend a morning making one out of sand so that they could try to imagine what a hill looked like, this was flat desert) but I did struggle with animal husbandry and artificial insemination. That got a little bit confusing and there were a lot of giggles.

At the time, it had been six years since Namibia had gained it’s independence. Most of the teachers were Namibians, some who’d been sent overseas during the troubled years to be trained to return as teachers once they’d won the war. The final six of us were volunteers like myself. Everyone of the Namibians I met over those months had been through more than I could ever imagine. The students in my class told stories of abuse, of hiding under their beds with their faces buried in the sand as bombs exploded around them. Every week there were mines still being cleared and exploded outside the school grounds. There were posters on the wall that said, ‘Don’t touch it. Report it’. Accompanied by a series of pictures of childrens toys (these are what the landmines looked like). The teachers talked about what it was like to be seperated as a child and sent off to far reached places across the world to be educated for a life and career that they hadn’t chosen for themselves and yet there wasn’t a day that went by that wasn’t fun. There wasn’t a day when I saw anyone feeling sorry for themselves or down about life. Life was to be enjoyed and celebrated and if something went wrong other people were always on stand by to help you out.

It was in Namibia, despite a diet of beer and chips or, on special occasions, pasta with tinned pilchards. I learned that life wasn’t about money or power or material posessions.

The people had a vision that they dedicated themselves to. For a brief moment in my life, I got to be a part of that vision and I learned to understand the power it gives people; the sense of fulfilment they experience as they achieve each milestone, and the joy they have working together as a community to make that vision a reality.

For the first time in my life, the world slowed down. We’d lie out on the sand of the desert floor and look at the stars. With no lights for hundreds of kilometres, the night sky was spectacular. In the evenings, the students in the school would sing. One classroom would start up while they were doing their homework, and others would join in. Hundrends of voices singing together in perfect harmony. It’s an experience I will never forget and one of the greatest priviledges of my life.

I learned to be grateful for everything I had. To seize any opportunity. And to remember that the most important things in life are about being loving, kind and accepting.

When people come together and support each other to create a better future, nothing much else matters because no matter what your current situation is, a powerful vision inspires people with hope. It gives them the motivation to overcome the challenges in front of them, and bonds them in a way that leaves them fulfilled and happy.

It was something that was missing from my life back home and I learned there that I wanted to create a life for myself that embodied that. Later I would learn that my real purpose would be to inspire others to live life with vision.

I’ve written a short e-guide on ‘Vision’ for companies. 🙂 Click here to download: “How to inspire your employees and get them excited by your company vision”.

Take Me to My Free eGuide